Showing posts from April, 2021
Show All 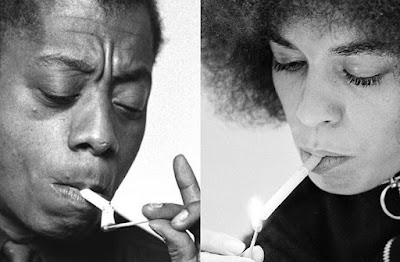 Thursday 6th May  |  5:30-7:00pm BST  | Zoom  Our penultimate meeting will look at James Baldwin's 1971 open letter , published in The New York Review, to Angela Davis. The letter was written by Baldwin to an imprisoned Davis in 1970, where she was being wrongfully held in relation to a courtroom shooting in California where three men and a judge died. She was acquitted in a federal trial in 1972. The letter is written in solidarity with Davis and addresses being black in America, American whiteness, intergenerationality and the American prison system. If you would like to hear Baldwin read the letter, it is available here (from 15:21 on). Alongside the letter, we have chosen to discuss a short section of  Are Prisons Obsolete? (2003) by Angela Davis.   In the second chapter, titled 'Slavery, Civil Rights, and Abolitionist Perspectives Toward Prison' (pp. 22-39), Davis contextualises her discussion of prisons within the history of antiblack racism and injustice in the US, f
Post a comment
Read more
More posts